This is a blog about autism. The topics addressed encompass all that falls under the ASD umbrella: the neurodiversity movement and the politics of autism; gender and sexuality in the autism community; scientific progress in understanding and explaining autism; the transition to adulthood for autistic youth; diagnostic numbers and changes in the categorization of autism; the disabling and enabling traits that come with autism; how autism affects family life, friendships, romantic relationships, and workforce integration; and more.

Contact Kirsten at any time using the form at the bottom of this page. Topic suggestions are welcomed, as are any messages from readers seeking advice for more specific circumstances. Unfortunately due to the high volume of emails, replies may be delayed, but Kirsten tries her best to respond to everything!

Each post is paired with a drawing or painting by the author. 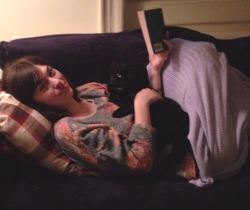 Kirsten Lindsmith is an artist, writer, software developer, and autism advocate. After receiving an ASD diagnosis in 2010 at the age of 19, she began co-hosting the online television show Autism Talk TV and speaking at conferences and events about her experience as a woman on the spectrum. Kirsten has written columns for Wrong Planet and Autism After 16, and was profiled in The New York Times. She is a member of the board of advisors for the Yale Child Study Center’s Initiative for Girls and Women with Autism Spectrum Disorder.

In addition to writing and public speaking, her work on the autism world over the years has encompassed classroom teaching, in-home therapy, career and life coaching, and the development of accommodation plans for academic settings and other contexts (including the autism accommodations for the 9/11 Memorial & Museum). She currently works as a full-time software engineer and part-time autism consultant.

Kirsten graduated from the University of Massachusetts Amherst with a combined degree in Biology, Microbiology, and Anthropology, with a concentration in Vertebrate Ontogeny and Phylogeny. Her interests include javascript, neurodiversity, human and animal biology and behavior, and petting soft cats. She lives in New York City with her cat, Buffy.

Kirsten can be contacted through Facebook, email, or by using the form below.

While The Artism Spectrum does address autism issues relevant to the public sphere, it is still a personal blog, and as such it is not a forum for slander, insults, hateful debate, or harassment of any kind (no matter how much you may feel the subject deserves it!)

Healthy debate and criticism of topics and individuals such as public figures, policy makers, organizations, or the author herself are tolerated and even encouraged so long as such comments are written compassionately and constructively.

The Artism Spectrum reserves the right to:

The Artism Spectrum is not responsible for the content of comments left on this site by parties other than the author (Kirsten).